Daniel Dickard is experiencing three firsts in his life.

He will be nominated as president of the Southern Baptist Convention’s Pastors Conference just prior to the annual SBC meeting in Anaheim, Calif. Jordan Easley, pastor of First Baptist Church in Cleveland, Tenn., will make the nomination.

Dickard told The Courier, “My vision for the SBC Pastors Conference would be to highlight a wide swath of faithful SBC pastors of all ages, many who are unknown and minister in remote obscurity, as we focus on the idea that character matters in ministry.” 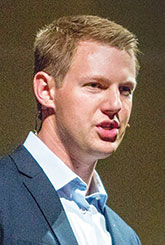 He is also serving in his first pastorate, Friendly Avenue Baptist Church in Greensboro, N.C. Dickard is a graduate of North Greenville University and holds a Ph.D. from Southwestern Baptist Theological Seminary. Wayne Dickard, his dad, is a longtime pastor in South Carolina (now retired) who served as president of the South Carolina Baptist Convention.

Daniel stated, “There are many truths I have learned as a young pastor.” Chief among them, he said, is that “character matters in ministry. Competency and charisma should never outpace character.” He emphasized that “the bright lights of ministry can produce unhealthy ambition for many younger leaders. But we must all be reminded that ministry is an altar of surrender, not a stage for performing.”

In March he released his first book, “Church Together: The Church of We in the Age of Me” (Wipf & Stock Publishers). O.S. Hawkins, newly retired president of GuideStone, wrote the foreword to the book, and Southwestern professor David Allen wrote on the back cover, “Seldom have I seen a manuscript that exhibits such theological acumen, cultural insight, and practical savvy. I have no doubt that it will be a bestseller.”

Dickard explained that Part One of his book “examines the three rotten fruits of individualism within the ‘Church of Me’ — consumerism, pragmatism, and the extremes of legalism and liberalism. Part Two offers a solution on what it will take for churches to make a healthy transition from the ‘Church of Me’ to the ‘Church of We.’ ” He added that “the greatest underlying threat to the church today is individualism.”