June was a historic month for the North Greenville University baseball team. The Crusaders made their first appearance in the NCAA Division II College World Series and won the national championship, defeating Port Loma Nazarene 5-3, the defending champions from San Diego, Calif.

Michael Faile of Boiling Springs went 5-for-15, knocking in five runs during the series. He tore his meniscus in the first game of the conference tournament, but had surgery and played in NGU’s championship run. 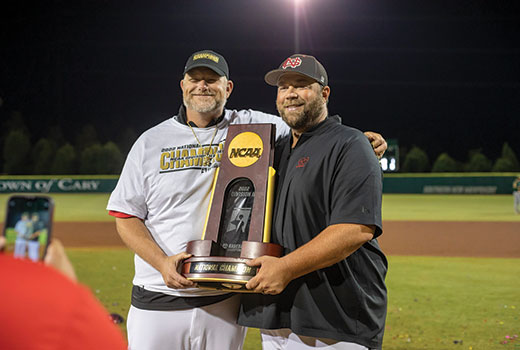 Landon Powell, former Gamecock great, is the head coach of the team. He said, “National champs, I mean what more can you want? This is what we’ve been working for, dreaming of, and praying for. There were times when we weren’t sure it would ever happen, but here we are. It is definitely a full-heart moment.”

Powell was inducted into the University of South Carolina Association of Lettermen’s Hall of Fame earlier this year. He played in three Division I World Series with the Gamecocks, who won back-to-back championships in 2010 and 2011.

NGU President Gene Fant said, “Sometimes people — especially non-believers — think there is a conflict between excellence and being Christ-centered. But we believe that excellence should be a by-product of following Christ. This team is evidence of that. Coach Powell has modeled Christian love and discipline in how he has led, and the team has responded so well.”

Powell said, “It is awesome to have a platform like this at NGU. Baseball and the gospel don’t meet up in a lot of ways. It is nice to be able to have two things that I love.”

Powell had a stint in the major leagues and even caught a perfect game — a rare achievement in baseball. He was hired in 2014 and inherited a program that was coming off a 8-35 record. In his first season, the team won 22 games and continued to produce consecutive winning seasons culminating in the ultimate achievement — winning the Division II World Series.

In 2013, he and his wife, Allyson, suffered the loss of one of their twin infant daughters, Izzy. She had a rare autoimmune disease and died at four and half months. The couple went through that great pain, comforted by God’s grace and the presence of Izzy’s sister, Ellie, and older brother, Holden. ESPN produced a film about the couple’s journey that can be seen on espn.com, “The Backup Catcher.”

“For us, we went through a valley, which was really a low point, but now that we’re on the other side of that, it gives you a perspective. We are thankful for things we do have.

For my wife and me, losing our daughter makes us cherish our two kids that much more and really value our time with them.” 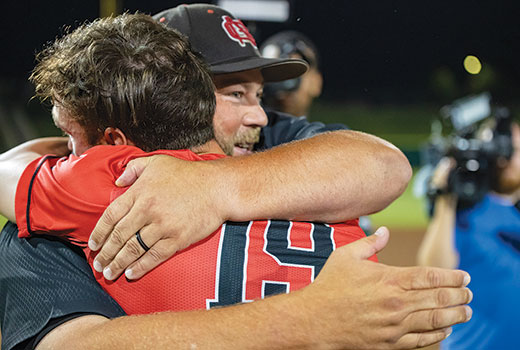 The Powells started a charity called “Donors on the Diamond” in honor of Izzy. It helps children needing medical intervention, particularly transplants.

Powell also has a rare liver disease — autoimmune hepatitis — that will likely require him to need a liver transplant in the future. He has demonstrated that he is a winner, and he continues with that attitude at NGU. He said, “North Greenville is a Christian school that shares a lot of the same values I share in my life and in my faith. It is an opportunity to not only coach baseball, but also an opportunity to impact some kids’ lives on a bigger level.”

Two of the best players on the NGU team are second baseman Gehrig (named after New York Yankees’ great Lou Gehrig) Octavio from Hawaii and outfielder Marek Chlup from the Czech Republic. They room together at NGU and have become close friends, even though they live thousands of miles from each other.

Powell’s dad said he has had a “lot of miracles in my life. The first thing I noticed (when he was born) was his big hands. I’ve got myself a catcher.” Indeed. USC benefitted from his talents, and NGU is blessed through his Christian devotion and winning ways. But baseball is not his Lord, Christ is — and he seeks to serve and honor Him. His dad also told him, “Baseball is a vehicle, not a destination. It isn’t about where baseball can take you; it is about what it teaches you.”

Life, baseball, and especially God have shaped Powell’s life. He is a winner. NGU is a national champion, and their future is bright with Powell at the helm.