A six-member team of South Carolina Baptists returned June 11 after assisting with humanitarian relief efforts in a Romanian town on the Ukraine border.

The team’s purpose was “to serve the precious people of Ukraine who have found themselves displaced from their homeland, forced to leave their homes and families,” said team leader Wil Bradham, director of missions for Southeast Baptist Association. 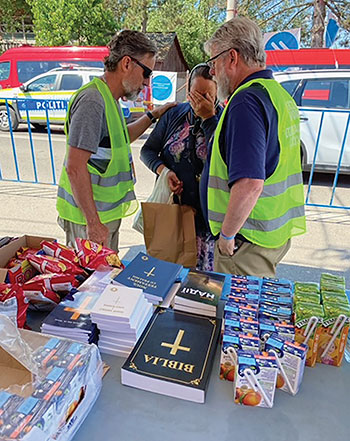 Robbie McAlister and Wil Bradham pray with a Ukrainian woman.

Team members had “just an incredible time, not just with the Ukrainian refugees, but also with the precious Romanian people,” reported Bradham, a member of Georgetown’s First Baptist Church.

“God just knitted us together as a team of six,” Bradham said, noting how team members were able to use their individual strengths.

Bradham, for example, is a former missionary who served in Romania for three years, until family health issues made it necessary to return to the States. He serves on the leadership team for South Carolina Baptist Disaster Relief, and the team was part of a larger, ongoing effort of Southern Baptists’ Send Relief organization that provides aid to refugees.

Another member, Robbie McAlister, is a people group strategist for the South Carolina Baptist Convention, who earlier served in Kyiv for 10 years, which enabled him to assist in communicating with many Ukrainians who speak Russian.

Still another member, Deborah Guest, is a former missionary kid whose parents had served in South Korea — which led the team to a “divine appointment” with an ambassador from South Korea and a young Korean diplomat, who told the team he was searching for a church home. “Only the Lord could orchestrate this!” Bradham exclaimed. 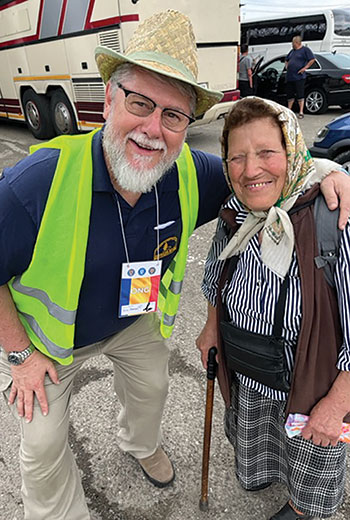 Wil Bradham talks with a Ukrainian grandmother, whom he and Robbie McAlister walked to the border crossing.

“As we were getting ready to leave the Greenville-Spartanburg airport, we just prayed, ‘Lord, would You just allow us to have some divine appointments?’ And He just smiled upon that [prayer] like crazy,” Bradham said.

The South Carolina team also assisted pastors of about 80 churches who were filling a van with dry goods for people in a town in southern Ukraine. They were collecting diapers, flour, canned goods, onions, potatoes, carrots, and other basic staples — and pastors in Ukraine were distributing the items among brothers and sisters in Christ who were in need.

On the border, the team served at a booth, providing water, snacks and Bibles in Ukrainian, Romanian and Russian. They spoke with numerous people, praying with them and even sharing the gospel with some. “Many of them were very receptive,” Bradham said.

In yet another “divine appointment,” McAlister was speaking in Russian to a woman and asked Bradham to pray in English while he translated. “Come to find out, she was a sister in Christ, and then she started praying,” Bradham said. “Guess what language she was praying in? … Romanian.

“I looked at Robbie and said, ‘Wait a minute. She’s speaking in Romanian. So I can actually speak with her,’ ” Bradham continued. “That was a neat moment. Our God is an awesome God, and He knows all languages, and understands when His children are crying out.” 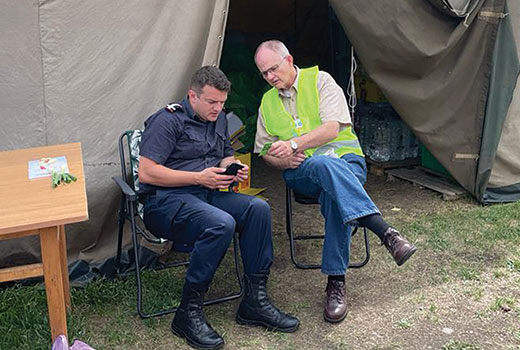 For Bradham, the trip also afforded an opportunity to return to where he had once served many years earlier. “Tears welled up in my eyes,” he recalled. “I’m like, ‘Thank You, God, for giving me another opportunity to be back in this country.’ ”

That was the team’s objective, after all: “We pray for peace. We want peace,” Bradham said. “But our main objective was to be boots on the ground, to minister to hurting hearts and to not just give a cup of cold water in the name of the Lord, but also look for opportunities to share the gospel. I think we fulfilled that mission,” he said.