Summer camps hosted by the South Carolina Baptist Convention and its three universities — in spite of having to overcome the challenges caused by the COVID-19 pandemic — are seeing thousands of kids returning for fun and hearing the gospel each week.

“This is our 27th year of camp and our biggest summer ever,” said King. “We’ve broken all previous attendance records and are seeing more students respond than ever before, which, I believe, is a sign of the spiritual hunger in our nation.” 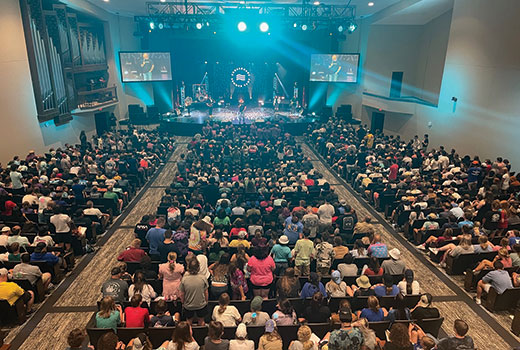 Worship is an important part of Crossroads — and other camps — where many decisions for Christ are made each year.

Crossroads reported 465 professions of faith, 138 decisions for ministry, and more than $13,800 raised for missions. In addition, 107 children have been sponsored through Compassion, a non-profit ministry based in Colorado Springs that feeds and teaches the Bible to more than 2 million children worldwide.

McCall’s attendance will finish near the 2,000 camper range for the summer, which is “a great number based on a number of very big hurdles we have,” Allen said.

Most importantly, McCall has seen 130 decisions — 26 professions of faith, 86 re-dedications and 18 commitments to Christian service — during its first four weeks of camps.

“And we know, because we consistently hear it from parents/churches and even campers, that many lives are impacted without ever making a ‘formal decision,’ ” Allen added. “The strong positive example and role model that our staff have set is a huge part of the ministry here and has a lasting impact.”

“It’s a challenging time to run a summer camp, but we’re glad to be back,” he said.

“Our attendance is about the same as last year,” Skelton said. “We have fewer staff this year, so we can’t accommodate as many campers as we could have.

“Our campers have really enjoyed our staff and missionaries, and they have made some life-changing decisions, too,” Skelton said.

“After four weeks, we have had just over 3,400 participants and expect close to 5,000 campers before the summer is over,” Watson said.

So far, FUGE had seen 85 salvations, 87 recommitments, 36 calls to ministry, and 12 other decisions, he added.

Charleston Southern University is hosting SummerSalt and KidSalt camps (both sponsored by the South Carolina Baptist Convention) this summer. As for pre-COVID numbers compared to now, CSU appears to be rebounding a bit: SummerSalt has seen 2,900 campers, and KidSalt has seen 843 campers. Adding music and athletic camps and others, CSU will see more than 4,000 campers this summer.

The university learned a lot through COVID, especially focusing more on how to care for others, but CSU missed the opportunities to build community, according to Clark Carter, vice president of Student Life. “Life is about relationships, and virtual relationships are poor substitutes for building a genuine community,” Carter said.