The entire island of Puerto Rico lost power over the weekend as Hurricane Fiona brought havoc on Sunday, Sept. 18. Send Relief pre-positioned its response ahead of the storm’s landfall and has begun assessing the need.

“Fiona whipped across southwest Puerto Rico and knocked out the fragile electrical system,” said Coy Webb, Send Relief’s crisis response director. “This has created an island-wide crisis. The good news is projections have most electricity returning over the next three to five days for most of the island.” 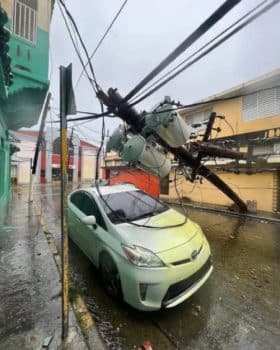 Winds from the storm knocked out power to the entire island as torrential rains generated flash flooding. The southernmost region of the island has been the hardest hit, according to reports from Puerto Rico. (Send Relief photo)

The bad news, however, is that intense rain — up to 25 inches over the last 14 hours in some parts of the island — has caused widespread flooding and generated mudslides. By the time the storm exits Puerto Rico, the rainfall total will likely hit 30 inches in the southern portion of the island.

The storm made landfall Sunday afternoon with the strongest wind gusts measuring 103 mph in Ponce, a city on the island’s southern coast that is the second-most populated city in Puerto Rico. Those winds cut the power of the island’s fragile power grid, but the torrential rainfall and flash flooding is likely to do the most long-term harm.

So far, the reported damage has not been nearly as widespread as 2017’s Hurricane Maria, which swept over the entire island as a Category 4 storm. Still, the southwestern part of Puerto Rico was hit hardest, and the impact has been significant. And Fiona comes after the island has been dealt serious blows in recent years following Maria, including earthquakes and the devastation wrought by the COVID-19 pandemic.

The North American Mission Board has intentionally focused resources in Puerto Rico through Send Relief and Send Network, NAMB’s church planting arm. Numerous native-born Puerto Rican missionaries heeded a call from God to return to Puerto Rico from the U.S. mainland to minister to and serve the island, especially after Maria.

“Send Relief was able to train 400 Puerto Rican church volunteers this summer,” Webb said. “This investment gives us a strong base for response to Hurricane Fiona.”

Send Relief anticipates their response will include providing meals, mudding out flooded homes and repairing houses, but as of Monday morning, it was still too soon following Fiona’s landfall to determine specific next steps.

“Send Relief is on the ground bringing help and the hope of Christ in the aftermath of this damaging storm,” Webb said.

Volunteers from the mainland U.S. will most probably be used in long-term rebuilding and recovery efforts as Send Relief volunteer teams have still been assisting residents recover from Hurricane Maria even five years after that storm’s landfall.

To give to Puerto Rico’s hurricane recovery efforts, visit SendRelief.org. Funds given through that page will go directly to support Send Relief’s response in Puerto Rico, as well as subsequent hurricanes in the 2022 season.

Send Relief provides the “one-stop shop” for Southern Baptist compassion ministry around the globe as a partnership between the International Mission Board and the North American Mission Board.