Mickey Caison and his team of South Carolina Baptist Disaster Relief volunteers were exhausted when they pulled into First Baptist Church of Homestead, Fla., on the evening of Aug. 25, 1992, just one day after Hurricane Andrew barreled into South Florida with winds of around 141 miles per hour.

The team had arrived in the area that morning and spent the day preparing to distribute food to those impacted by the hurricane. After getting to the church, they had a short team meeting and prepared for bed. That’s when the team heard police car sirens rushing toward them. A police officer in full riot gear met Caison outside of the church.

“We have permission though,” Caison said.

“You don’t understand,” the officer told Caison. “There are hundreds of people outside waiting to steal everything you have. You can’t stay here, and I can’t protect you here.” 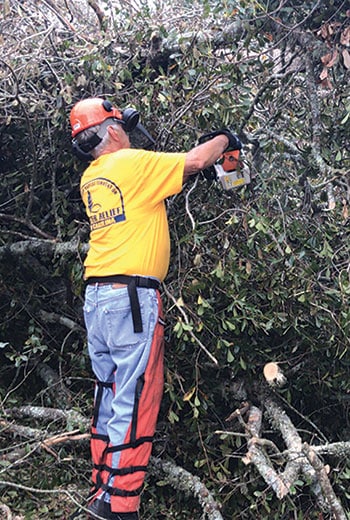 That’s when the officer led Caison and the rest of the team to a nearby middle school surrounded by a chain-link fence so the police could provide better protection.

Despite the difficult beginning, the next few weeks would be full of productive ministry for Southern Baptists responding to one of the most damaging natural disasters in American history. Southern Baptist Disaster Relief volunteers prepared 2.5 million meals to help those affected by Hurricane Andrew. That was the highest total until Hurricane Katrina in 2005.

Caison led SBDR for more than 23 years at the Brotherhood Commission, followed by the North American Mission Board. He calls the SBDR response to Hurricane Andrew — along with its responses to 9/11, Hurricane Katrina and Hurricane Sandy — key turning points for the ministry.

The Southern Baptist response to Hurricane Andrew was one of the SBC’s early multi-front disaster responses, deploying volunteer teams to both South Florida and Louisiana. Although Caison says the hurricane’s destruction didn’t cover a large land mass, it hit high-population areas hard.

“There was massive damage in a high-population area,” Caison said. “So, when it came through there, and with the damage that was done, it afforded us not only a longer response in feeding operations, but it gave us an opportunity to engage more volunteers. It gave a taste of this kind of ministry to people who had not been involved in it.”

Caison says that back in 1992, SBDR didn’t have the strict requirements for training and background checks, which made it easier to get involved. 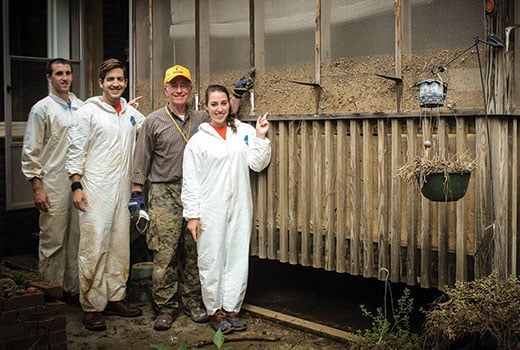 A group of BCM student volunteers point to the high-water line following flooding in a Columbia neighborhood in 2015.

“It gave us a larger television presence, which was a public relations opportunity with new news media covering the activity,” Caison added. “It didn’t just cover the damage and the deaths and injuries, but it moved into the response activity for not only Southern Baptists, but other organizations as well.”

As the director of Florida Baptist Men at the time, Cecil Seagle knew business as usual for disaster relief wouldn’t work with the aftermath of Hurricane Andrew. Until then, most disaster relief work centered on feeding units. While Southern Baptists fed more people after Hurricane Andrew than any preceding disaster, Seagle wasn’t content with leaving the work there.

John Sullivan, who served as the Florida Baptist Convention’s executive director from 1989 to 2015, had made available all non-essential state convention employees to disaster relief work.

“They slept on floors. They slept in hot buildings, and they stayed with us through this entire time,” Seagle said. “So, I rejected the notion of ‘one-and-done feeding and we’re done,’ because we knew that the devastation was at such a magnitude that we could make an impact.”

Seagle dispatched disaster relief teams throughout communities, discovering needs and then networking in the evening with other volunteers about how they might meet those needs. He says Florida Baptists, with the support of all Southern Baptists, were committed to staying and meeting the needs of South Florida until all the money and volunteers ran out.

Realizing through their response to the hurricane that they needed more volunteers and more resources, Florida Baptists began to emphasize disaster relief. In time, the state built one of the most effective disaster responses in the country.

“I thank God for Southern Baptists who came,” Seagle said. “Somehow, the Father allowed us to survive all of that and actually to thrive. It was a marker and a half for kingdom work across South Florida.”

Volunteers from Edgefield Association help with a mud-out project and clean-up at a flood-damaged home.

Caison, a South Carolina Baptist pastor at the time, describes it as a spiritual marker in his own life. He had first gotten involved in SBDR when Hurricane Hugo devastated the area north of Charleston in 1989.

Through his church’s response to Hurricane Hugo, Caison had met and started relationships with several leaders at the SBC’s Brotherhood Commission. But during Hurricane Andrew, as he led teams into South Florida, he strengthened those relationships. At one point, he was asked to represent Southern Baptists at the Red Cross headquarters in Miami. In June 1994, he became the first national director of Southern Baptist Disaster Relief, a position he held for 23 years.

Richard Brunson had become the director of North Carolina Baptist Men just a few months before Hurricane Andrew, and the response was his first as leader of the state’s disaster relief work. Like Caison and Seagle, Brunson says Hurricane Andrew belongs in a long list of defining moments.

“In the life of most of us who worked in disaster relief, [Hurricane Andrew] was the first,” Brunson said. “It was the most devastating at the time, and it was different. We had to create new ways of [serving]. I think God inspired all those new ways and gave people vision. God was the one leading in that and bringing us along with how we could serve, in what we needed to do, and what kind of equipment we needed and how we needed to train people so that we could glorify Him in a greater way.”

— Tobin Perry is a writer in Evansville, Ind.