Our church is blessed to have the best greeter that ever walked the earth. His name is Freddy, and he is a Chiweenie.

A Chiweenie is a canine mixture of chihuahua and dachshund. Freddy is named after my grandfather and father, both Southern Baptist pastors.

We acquired this little dog in 2019, a year after our beloved 14-year-old border collie passed away. Freddy was three pounds of adorable, with big eyes, floppy ears that now stand up like antenna, and a rotund belly.

After a few months, I grew concerned because Freddy never barked. So I took him to the vet to see if everything was okay. The vet said that, yes, Freddy could hear and bark, but he just didn’t want to, and did I want him to teach the dog how to bark? Of course, my answer was NO!

As time went by, we began to take Freddy with us on church outings. He became loved by the church children and adults as well. One Sunday morning, I took Freddy with me to church to visit with my preschool Sunday school class. I was amazed at the reaction from the church people, and now Freddy is a prominent member of the church. He attends every Sunday.

Nova Church in Walterboro is a plant that my husband, a retired director of missions for Colleton Baptist Association, started 10 years ago. We live in a small town and were concerned when young families began leaving the community and driving an hour away to attend contemporary worship services in Charleston. There were no contemporary churches in our town at that time, so my 57-year-old husband felt that God was leading him to plant one.

We had a lot going against us. First, we were green as grass and knew nothing about planting a church. Second, my husband was 57 years old! He wasn’t one of those young, cool, dynamic rock-star pastors who could really stir up a crowd. He was bald with no trendy hair style. And to make matters worse, the traditional church members throughout the community were not happy that we were “trying to take away their young people.” We felt God’s leadership throughout the difficult struggle and persevered.

We purchased an old building, renovated it with free labor from the church people, and, with God’s blessing, paid off the mortgage recently. And we made it clear from the start that anyone and everyone was welcome, casual dress preferred, and our sanctuary would be functional — not overly decorative with high-end furniture, carpet, or stained-glass windows. We didn’t want to make an idol out of a church building. Now people bring in their water bottles and coffee and enjoy worship. We don’t care about spills, we only care about loving the Lord.

Several months ago, my husband had a meeting at another church, and Freddy and I rode along. I thought I would walk Freddy around the nearby acreage and get some exercise during the meeting. As we passed by a door, someone opened it, and Freddy took off into the church building where his dad was. A deacon there almost had heart failure and frantically began to shout that a dog couldn’t come in the church. Why not? Freddy went into our church every Sunday. He was cleaner than some, and better behaved than most. This was the kind of church we DIDN’T want to have.

One Sunday I was driving to church with Freddy in my lap, and for some reason, I paid close attention to his behavior. He calmly sat there until we reached the church driveway. Then it started. His tail started furiously wagging. His ears shot up, and little whimpers came from his throat. He could barely wait until I stopped the car and opened the door.

Then he shot out like a rocket and made a beeline to the front door where he danced around on all fours. Opening the door, he took off into the church, stopping to see every single person. He didn’t miss saying hello to anyone. He brought a smile to every single face, licked a few of those faces, tolerated cuddles, played with children, and then jumped up into his little bed I keep there on the front row.

I noticed that when new children would visit our church and were afraid to leave Mom or Dad to go to Sunday school, Freddy would lead the way and the children would laugh and follow. Any new visitor at first would look askance and with raised eyebrows at seeing a 14-pound dog in church, then smile, and automatically feel at home when Freddy welcomed them.

We took Freddy to visit shut-ins, and one dear lady who had terminal cancer never failed to laugh when the little dog would climb into her lap and try to lick her chin. She said she always felt better when Freddy came by.

My husband received a phone call one day from the brother of one of our members. He was deeply concerned because his sister, who had just lost her husband, had locked herself in her room and wouldn’t respond to anyone. I told my husband to take Freddy; he would get her to come out. Upon arrival, the widow refused all entreaties to come out until her brother told her that Freddy was there. The door opened, she rushed out, grabbed Freddy, and began to cry cathartic tears. He had accomplished what no one else could. 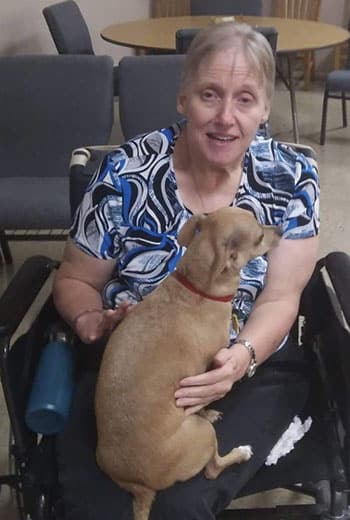 One lady in our church who is wheelchair-bound due to a stroke joined our membership simply because of Freddy. She told me that she had been to several churches, and no one spoke to her. They all acted afraid of her. But not Freddy. On her first visit, I picked him up and sat him in her lap, much to her joy.

After watching Freddy, it dawned on me that we all could be more like him, and I came under conviction about my attitude on Sundays.

Am I so excited about going to church on Sundays that I actually quiver? Am I so thrilled about the opportunity to worship that I can’t wait to get in the door? Do I lovingly speak to every single person there? Do I take time with the disabled members and shut-ins? Do I work extra hard to make visitors feel welcome? Am I patient and loving with the children who are fearful? Do I whine and complain about the temperature, music, décor, and length of the sermon — or do I just ignore it and enjoy worshipping with God’s people in God’s house?

God wants our joy. He craves our worship. Freddy has taught me a lot about simple, uncomplicated love and devotion in God’s house and among His children. Maybe he has taught you something, too.