Mike and Debbie Baker met at North Greenville University, later married, and began a journey together that has been characterized by marital longevity and missions involvement.

The couple has been married for more than 50 years. She is a retired schoolteacher, and he has served on church staffs, was one of the founders of Joyful Sound at NGU, and has led his guided-hunt business for most of that time.

Currently, he is the director of missions (missions strategist) for the Palmetto Baptist Association and continues to provide guided hunts for sportsmen. The couple began going on mission trips to Indonesia in 1996, before being appointed by the International Mission Board under a special provision.

“Finally, we were assigned as missionaries when Debbie retired from teaching. We were appointed under the International Mission Board’s Master’s Program. It is designed for those who are older yet experienced,” Baker said.

The couple spent two years in Indonesia before returning to South Carolina, when he began serving as a DOM and restarted his Sunshine Hunting Preserve.

It was in Sumatra where the couple met missionaries Mark and Barbara Stevens. The Stevenses currently serve at the IMB’s Missionary Learning Center in Rockville, Va., and will be speaking at the Palmetto Association’s annual meeting on Oct. 16, followed by a luncheon for DOMs and pastors on Oct. 17.

“I originally called Mark to ask him if he could possibly send a video of the Missionary Learning Center. It is one of the best-kept secrets among Southern Baptists, a beautiful place where our missionaries are trained before going to the field,” Baker said.

Stevens told him, “I will come to your meeting.” Baker replied that it was a six-hour drive, but Stevens insisted, saying, “We’ve driven hours and hours and hours in other countries. It would be a blessing to come.”

Baker shared the story of God’s providence during the Stevenses’ departure from the Philippines.

“A terrorist dropped a backpack bomb in an area where a large group of people were waiting. When the bomb went off, 120 people were injured,” he said. “Our missionary Billy Hyde was killed, and the Stevenses were injured along with their infant daughter. The baby was rushed to the hospital, and the medical team discovered that most of the nails and metal shards from the bomb had gone into one area of the baby’s kidney. They were able to extract the metal and save the child’s life with no permanent damage to her kidney.”

Baker added that any WMU group or missions team would find the Stevenses’ story interesting. 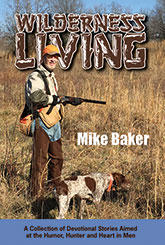 He has continued to work as a hunting guide in the Upstate for 36 years and often has opportunities to share the gospel with his clients at his hunting preserve. He is a natural storyteller, and God has used him in wild game banquets, retreats, sermons, and writing to exalt the name of Jesus. He wrote a book, “Wilderness Living,” where he combined his passion for hunting and his commitment to share the good news of salvation.

“I get to share my heart, and it puts me in contact with guys who would probably never meet a preacher, minister or Christian-type person,” he said. “Many hundreds of hunters have been given my book to read.”

He is working on a second book, “Sunrise, Sunset and All the Blessings in Between,” which could be ready by the end of 2023.

Mike and Debbie’s journey together began at NGU at a time when both were praying for their mates, not knowing who that was. “When I walked on campus, she was rehearsing for a BSU program. I heard that beautiful voice, pulled the curtain back, and heard Debbie singing,” he said. He added that he believed the Holy Spirit spoke to his heart with the message, “There she is.”

After 50 years and 10 months, they continue to live out their love story through teaching, music, missions, and hunting.

Maybe there is a third book in the future about their story.