From the conversion of a witch doctor to the tragic death of a missionary friend, Mark Stevens has much to share about the supernatural power of God at work in this world.

Speaking to a group of mission strategists and others at Mount Airy Baptist Church in Easley in an event hosted by Palmetto Baptist Association and the South Carolina Baptist Convention, he spoke with passion about his journey as a missionary.

On March 4, 2003, Stevens was serving as an International Mission Board missionary in the Asian Pacific Rim. He, his wife Barbara, and two children were returning from a trip. His good friend and fellow missionary Bill Hyde came to the airport to pick up the Stevens family. “Barbara and our two kids went to get the bags. Suddenly an explosion rocked that area of the airport. A terrorist had planted a bomb.”

Barbara and the kids were injured. Stevens said, “I ran up to Bill to find him dead. Barbara and our kids were on the way to the hospital. Our nine-month-old son had a bleeding disorder, and he was hit by flying shrapnel.”

At the hospital, Stevens held his son in his arms, wondering if he would live or die. “I told the Lord I was done and that I wanted to go home. The next day, my devotion was about God giving His Son for us,” he said. “Still my wife and I pleaded with God to send us home. We knew God had to send us home because He sent us there.”

The IMB, he said, took care of them and even offered to send them home for a while. They went to a hotel in Manila and begged God to send them home. “God kept telling us to train the Filipinos. Then something powerful happened. Hyde’s widow, Lynn, placed flowers at the airport with a sign that read, ‘Filipinos are worth dying for.’ ”

Stevens said they had been working for five years to reach 21 unreached people groups but “had made very little progress and were struggling.” The sign that Lynn placed at the airport was working in the lives of the Filipinos. 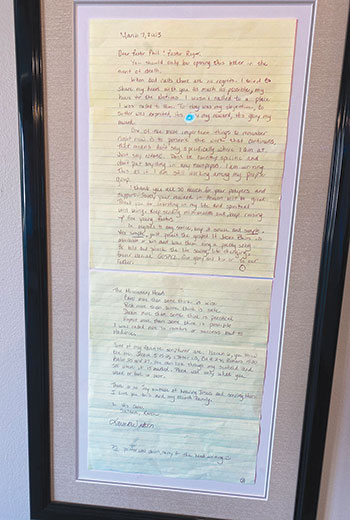 Handwritten letter from a missionary that was to be read in the event of her death.

The Stevens family did come back to America briefly before being assigned to another country in the Asian Pacific Rim. There, Stevens met a Christian church planter who received Christ as Savior. He had the reputation of being a terrorist before he was saved. He asked Stevens, “Did they tell you I used to be a terrorist?” As the two talked and Stevens shared about his friend being killed in a terrorist bombing, the man confessed, “I financed that attack.”

God was now using the man who was responsible for murdering his friend and nearly killing his son. Stevens said, “What Satan intended for evil, God meant for good.”

He told the story of one hard-to-reach man in a village. “We shared gospel stories with him and others day after day. We asked this man if he could recall the story every day. He said he could not. One of the natives suggested that we pray for the man by name in our prayer groups. We did.

The next time we met and shared the gospel story, we asked him if he could remember it. He remembered every one of them.”

The man was saved, and Stevens found out later he was a witch doctor in the village. “He burned all his books, incantations, etc., in front of the church and followed Christ,” Stevens added.

Today, the Stevenses are back in America, working at the IMB’s training center in Virginia. Stevens says, “Missionaries often struggle when they get to the field. They often just want to come home. They need people who are holding the ropes back home to encourage them and pray for them.”

He encourages churches to bring groups to the Learning Center to pray for missionaries in training and help them get settled. He invited South Carolina Baptists to contact them so they can make arrangements for groups to meet these missionaries, eat with them and spend some time getting to know them. 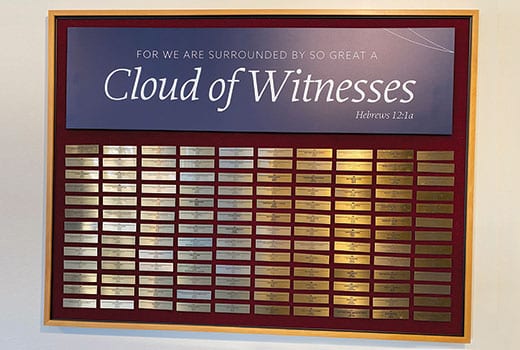 A plaque from the “Cloud of Witnesses” honoring those missionaries killed while serving.

“God is doing some amazing things throughout the world through our IMB missionaries.”

People have the opportunity to view the “Cloud of Witnesses,” where the names of over 300 missionaries who were killed while serving Christ overseas are posted on plaques. They stand out as faithful examples of what it means to give all in serving the Son of God.

The Lottie Moon Christmas Offering for International Missions is coming up soon, and it is essential that Southern Baptists continue to provide financial support for our faithful missionaries.