Whenever I encounter the question, “What are your favorite books?” I am always reluctant to mention the Bible. While I understand and appreciate why Christians mention Scripture, I hesitate to evaluate Scripture because Scripture evaluates me (James 1:23-24). Whether or not I delight in the Bible — and sometimes I don’t — says more about me than about the Bible.

We could think about this principle when we think about the last third or so of 1 Samuel. In 1 Samuel 19, Saul boils over with envious rage against David, and his murderous rampage ravages the land of Israel. Beginning with Chapter 19, David is in exile until Saul’s death at the end of the book. We’ve seen in this column that a major purpose of 1 Samuel is to highlight David’s importance as God’s king over Israel. The lens through which we’ve looked at 1 Samuel is one in which we see David as foreshadowing Christ. If Scripture reveals who we are, we can think of the characters who encountered David in exile as ways people can respond to Christ.

Saul’s son Jonathan is one of the first characters who believed in David (1 Samuel 19-20, 23:16-18). Since Jonathan had the most to lose, we would expect him to be the least likely to trust in David. Along with accomplishing major military victories, he was the presumptive heir to the throne, yet he laid aside that privilege in accepting God’s promise that David would be king (23:16-18). Jonathan’s life parallels those who sacrifice much to follow Jesus.

Secondly, an unlikely group followed David: “every man who was desperate, in debt, or discontented rallied around [David], and he became their leader” (1 Samuel 22:2, CSB). This ragtag group was never large or influential, which reminds us of Paul’s words to the Corinthians: “God has chosen what is insignificant and despised in the world to bring to nothing what is viewed as something, so that no one may boast in his presence” (1 Corinthians 1:28-29). We have nothing to boast of before God since the despised are often the quickest to follow Christ.

The high priest Ahimelech was another who trusted David. When David came to him at Nob desperately needing food and supplies, Ahimelech provided food and a sword (1 Samuel 21; see Mark 2:25-28). With the help of Doeg the Edomite, Saul did to the little town of priests what he was unwilling to do to the Amalekites: He killed everyone except for Abiathar (1 Samuel 22 and Psalm 52). Ahimelech’s righteous death prefigures the deaths of the martyrs. He and dozens in his extended family died because of his faithfulness.

Lastly, Abigail, the wife of a wealthy landowner, supported David. When her husband, Nabal (whose name means “fool”), refused to give David and his men supplies for protecting Nabal’s land, Abigail quickly rectified her husband’s injustice. After Nabal died, Abigail became one of David’s wives (1 Samuel 24). She reminds us of those who have been willing to place their faith in God’s Anointed One above their commitment to family and friends (Luke 14:25-27).

Each one who followed David differed from the others, but they all were committed to God’s newly anointed king. Many of them never saw God fulfill his promises before they died (Ahimelech and Jonathan). We, too, are all different, but what matters most is whether we put our faith in God’s Anointed King. 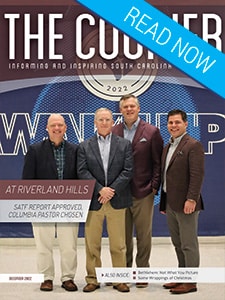