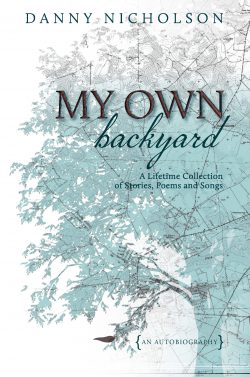 Most people who know Danny Nicholson are aware that he is president of Connie Maxwell Children’s Home in Greenwood, South Carolina. Some may even know that he was adopted and raised by a loving Christian couple.

People may not know, however, that Nicholson is also a poet, songwriter and musician, a “meaning maker” who sees God’s providence as a “thread of holy moments” that connect his life story to God’s redemptive story — including a transcendent encounter with a young boy who opened Nicholson’s eyes to the ministry he leads today.

Those “holy moments,” which Nicholson hopes will encourage others to find their own stories, are collected in his memoir, My Own Backyard: A Lifetime Collection of Stories, Poems and Songs.

In his first chapter, Nicholson talks about the book’s title. “Backyards are different, but the dreams, faith and simple ordinary treasures of home remain the same,” he writes. “I believe that backyards and hearts are much the same. We may be different people — different colors, different religions, different values — but we experience love, tears, broken hearts, and laughter much the same.”

Nicholson said he hopes his “scribbled-down thoughts from a napkin,” journal entries, stories and “simple songs” will encourage the reader “to remember with awe and wonder where you came from and inspire you with boldness and strength to envision where you are going.”

“My Own Backyard” includes lyrics from many of the songs Nicholson has written and sung, something he began doing while a student at Charleston Southern University. He and his friends recorded four original albums through the years and toured across the Southeast. All proceeds from album sales were used to minister to children and support mission work.

In the introduction to the book’s section on his songs, he writes: “These songs are like my children. Just like my children, these songs will be my legacy. They will still be heard when I lie down in silence.”

In a chapter titled “Will You Come to Me in My Dreams?” Nicholson tells the story of an encounter with a young boy at a beachside restaurant — an unexpected meeting that signaled the culmination of the author’s year-long “journey of the heart, soul and mind.”

Nicholson was pondering what was to come next in his life. He had spent the three decades since he was in college as a development officer, successfully helping colleges and universities raise financial resources. On that evening at the restaurant, awash in a sense of gratitude for the blessings of his life, Nicholson was feeling restless, thinking perhaps it was time to do something different — something that would allow him and his wife, Debra, to “thank God for the rest of our lives” for those blessings.

While waiting for their table, they met a six-year-old African-American boy — a foster child — who stole their hearts. That evening, they fell in love with a child they’d never met before, a boy who, before leaving, jumped onto Debra’s lap and asked, “Will you come to me in my dreams?”

For Nicholson, it was another one of his “holy moments.” When the boy walked away, Nicholson said to his wife, “I don’t know what just happened, but our lives will never be the same.”

A few months later, he saw the job announcement for the presidency of Connie Maxwell. He immediately remembered the foster child at the restaurant, a “messenger from God … calling us to finish our story … to do something bigger than ourselves.” Thinking about his adoption by parents who loved him, Nicholson felt called to “give other children the precious gift that [God] had given me.”

He responded to the ad and became Connie Maxwell’s president in July 2017.

The love and security he found in his own backyard and through the thread of holy moments in his life is something Nicholson wants the children of Connie Maxwell to know.

“All that kids need is a home,” he said. “All kids need a backyard to play in. All kids need to feel like they’re surrounded by something that loves them and will never leave them.

“My backyard was the cradle, the place I received all these things. We want to give these kids that backyard, that fun, that playing, that Bible teaching, that family atmosphere — all those experiences in the backyard that ultimately bring them into a full and healed life.”

All the profits from Nicholson’s book will go toward the Will You Come to Me in My Dreams Endowment, which provides recognition to Connie Maxwell volunteers and staff members who “go beyond the call of duty in taking care of children.”

“My Own Backyard” is available for purchase at DannyNicholson.com, Amazon.com and BarnesandNoble.com.