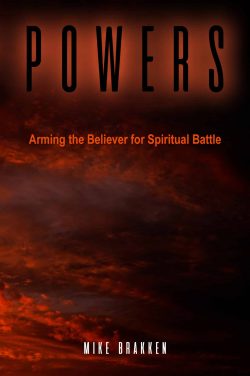 “Sometime in the middle of the night I woke up,” writes Mike Brakken in Powers. “I couldn’t breathe. I couldn’t move. I couldn’t even move my eyes. It felt like a weight of unimaginable strength was pressing down on me and paralyzing me. I was sure I was going to die.

“Even more terrifying, I felt a presence. I couldn’t see anything, but I could feel palpable evil around me. I was overwhelmed and terrified, and it felt like there was nothing I could do. I don’t even remember if I prayed.”

For some, the term “spiritual warfare” conjures up images of horror movies and Hollywood demons. That is not how the Bible sees it; spiritual warfare is simply part of the Christian life. From the moment of salvation to the return of Christ, our lives are war, conflict and struggle.

Writing from a missionary’s perspective, Brakken reminds us that temptation proceeds not only from our own hearts but also from the voice of a spiritual enemy. It is a war, but we don’t have to go into it unprepared.

Mike Brakken (a pseudonym employed here to protect his family and those with and for whom he serves) is a church planter and community development specialist. He grew up in Africa as the son of missionaries, served in South Asia on a three-year term as a Journeyman with the International Mission Board, and currently lives and works as a team leader in the mountains of Central Asia. He has a bachelor’s degree in English literature from Texas A&M University and a master of divinity degree from Southeastern Baptist Theological Seminary. He and his wife have three sons and two dogs. He calls east Texas home on the rare occasions his family visits the US.

“This is a superb work on spiritual warfare by someone on the frontlines of the battle. It is biblically and theologically faithful. It is brutally honest, and yet encouraging. I will be quick to commend it to all who are willing to get into the fight for King Jesus.”
Daniel L. Akin, President, Southeastern Baptist Theological Seminary