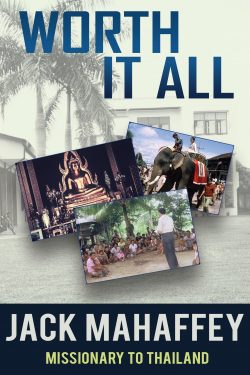 Moments after Jack Mahaffey preached his final sermon at Hat Yai Baptist Church in Southern Thailand, a man asked him if the three decades he had spent as a missionary had been worth it.

Mahaffey, who was raised in a mill village in South Carolina and received Jesus Christ as his savior at age twelve, said, “Yes, it has been worth it, and I thank God for letting us live among you and learn from you for those many years!” Mahaffey believed he and his wife, Oneida, were exactly where God wanted them to be, “and we never doubted that.”

Now, in Worth It All, Jack Mahaffey tells the gripping story of his and Oneida’s missionary journey — complete with river baptisms, devastating floods and a harrowing kidnapping by a band of armed men — while infusing his narrative with the deep love he felt for the Thai believers whose faithfulness became his inspiration.

Worth It All is available from Amazon.com, BarnesAndNoble.com, and from your favorite online bookseller by searching “Jack Mahaffey.”